"I was in seventh grade now, entering John Peter Tetard Junior High School 143. Tetard was located at 120 W. 231st Street, just shy of a mile from our neighborhood. We all knew that it was less than a mile away because, in New York City at the time, students could receive free bus passes to use on the city transit system if they traveled a mile or more to school. The furthest edge of our neighborhood, Dickinson Avenue, was literally a few blocks under the mile marker. Thus we were denied free transportation and it periodically chafed. A few enterprising individuals began forging bus passes on the appropriately hued construction paper to match that month’s bus-pass color, oftentimes with great success. After all, if you got caught you only lost a fake bus pass and were tossed off, which meant having to wait for the next bus and pay the fare, or simply walk to school . . . less than a mile away. Our other acts of rebellion were to hand our bus passes out the back window to one of our friends who would take the very next bus, or push open the back door to let our classmates sneak on. This sometimes caused the irate bus driver to push his way to the rear of the packed bus to try to stem the inflow. Our travels to school were always exciting.
In decent weather, my friends and I would walk to school together. Each morning we would meet at the east entrance to Pigeon Park, or in front of EM’s candy store, and begin our reluctant trek to school. All along the way we would hassle each other, show off for the girls, and meet other classmates in a slow accretion of bodies trudging along Sedgwick Avenue, past Ft. Independence, in pilgrimage to another day in junior high school. Coming home was similar, though less subdued and more joyful, as we made our way back to the safety and familiarity of our neighborhood.

"TETARD WAS THREE STORIES HIGH and shaped like a T. The hallways were covered with light tan-brown linoleum and had a white stripe running down the middle of each corridor. This was our “lane divider,” and during class changes everyone had to keep to the right of the stripe and move in an orderly fashion to their next classroom. During this time of controlled chaos in the hallways, faculty members were strategically placed on each floor. This was designed to keep students moving, to prevent them from cutting across the stripe, to keep the noise down, and to defuse any altercations. For most of us, cloistered and protected by familiarity in our various neighborhoods, this was our first real interactions with this many kids of different races, class backgrounds, and ethnicities, all piled into one building for seven hours a day. While my friends and I met most mornings and walked to school together, once inside the doors of Junior High School 143, it felt like survival of the fittest. It was a scary environment for a new, seventh grader like me, coming from a primarily monochromatic neighborhood. Tetard was filled with blacks, Puerto Ricans, Irish, Jewish, and a smattering of Asians and other students from various mixed backgrounds. Perhaps the hallway logistics, complete with floor stripe, was the administration’s attempt to mitigate conflict and tension, their reminder to us that we were all in this together, always moving in the same direction. Despite the best intentions by the powers-that-be overseeing Tetard, within the comings and goings of the general population, on the frontlines of student-to-student interactions, it was a complete zoo.

"Within my first month in seventh grade, as I settled into the daily rhythms of homeroom, I was fascinated by two of my black classmates, Henderson Heinz and Donald Washington. Henderson was stoically cool, quiet and intense; Donald was the joker, the goofball. They were both obsessed with the female derrière and spent every class change in the halls in single-minded determination attempting to cop a feel of as many girls’ asses as possible without getting caught. Walking behind Henderson and Donald was an experience in intense, fearful titillation as they each zoomed in on a likely target, walked as close behind one of the girls as they could and, in rhythm with the girl’s stride, slid their palms right against one or the other buttock, keeping it there for a full step or two. It was amazing to watch and even more amazing to see how rarely they seemed to get caught – except for Donald, who could hardly keep his excitement at bay and was regularly getting chewed out by a very agitated girl right in the middle of the hallway. Needless to say, Henderson’s cool demeanor prevailed in the competition when he and Donald tallied their daily “feels” at the end of each school day as I sat with them shaking my head in disbelief.
At another extreme, was Leslie Mendón, the biggest and toughest girl in the entire school, standing nearly six-feet tall, curve-less, and built like a refrigerator with glasses. She was incredibly strong and willing to mix it up with any guy in the school if she felt disrespected. When she barreled through the halls, all the students parted to allow her past. Leslie spent every lunch hour in the cafeteria surrounded by a huge crowd of students, as guy after guy tried to best her in arm wrestling – which never, ever happened.

"Meanwhile, sitting right behind me in homeroom, was Jessup Kingman, a super-smart, bespectacled student who brought an orange to school every day. When the teacher was distracted Joseph would open a rectangular wooden case, within which lay a shiny stainless steel syringe purloined from his father, a doctor. Nestled inside the metal housing of the syringe, a glass cylinder contained a clear liquid that sloshed from side to side as he positioned the syringe near to the peel. The liquid was alcohol and it was Joseph’s daily project to inject the orange, allow it to ferment throughout the morning, and then drink the juice – usually after lunch – and get a buzz. Perhaps this was his way of coping with the boredom, the chaos, or with the fact that the end of the school day meant going back home.

"Then there was the day when two students came to school wearing suits, ties, hats, and sunglasses, with attaché cases handcuffed to their wrists, all planned in honor of the new James Bond movie, From Russia with Love. And the day Turner, an older black student who had been “left back” and was repeating ninth grade, flashed a revolver in the cafeteria. Watching him remove the gun from his jacket was like watching him handling a deadly snake, repulsive and mesmerizing precisely because it was so dangerous. I had never seen a gun before that day and the surreal nature of that moment in the JHS 143 lunchroom evaporated ever so slowly when Turner finally pocketed the pistol, glanced nervously around, and disappeared into the crowd of students going about their midday business. It was like a daily immersion into an asylum; and these were just some of the students in a population of hundreds. 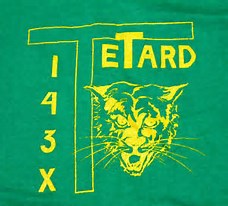 "Tellingly, there were only two teachers that made any impression or impact on me my entire first year in Tetard, both for very different reasons. Perhaps moving from having a single teacher the entire day in elementary school, to having at least five or six teachers each day in junior high, was simply too much for me to take in; so teachers really had to stand out for some particular, memorable reason other than the simple fact that they droned on interchangeably in front of the classroom. In any case, without these two to provide regular spikes in the flat-line that characterized my engagement with my first year of junior high school, I might’ve simply faded into the oblivious shuffling mass or joined Jessup Kingman in sucking alcohol-laced oranges in order to numb out." ("The Rail," Chapter Eleven, "Adrift").
Posted by Unknown at 2:32 PM No comments:

Excerpt from "The Rail" -- The strange days of childhood when the world goes tilt. . . 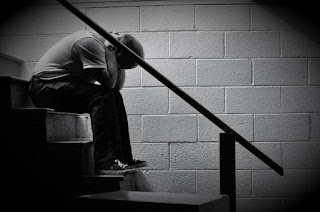