The Sheer Poetry of Basketball 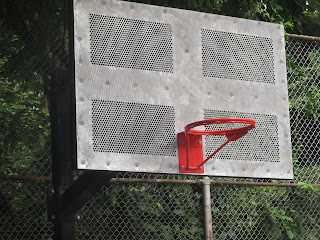 They call it "the city game," and for me it was never a game:

"IT WAS BASKETBALL THAT SAVED MY YOUNG SOUL. Between the relentless self-esteem pummeling that permeated the environment within my grandparents’ house, and my utter dislike of the entrapment called “going to school,” the playground basketball courts felt like another place where I gained respect and admiration. . . .

"I was not particularly graceful, but I possessed a blue-collar ethic and gave everything I had in ...every game. As one of the older guys once remarked about my presence on the courts, he just “liked to watch me work.” I felt as if I’d found the secret poetry of the game in the dueling dance movements with opponents, in the newfound freedom and artistry that every new game offered, and in discovering my own unique self-expression. Perhaps, most importantly, I was sought after to be on everyone’s team, and even after losing a game I never sat out waiting for “next.”


"As a result of the erratic quality and conditions of the other basketball venues, the heart and soul of neighborhood basketball, therefore, resided in the playground. This became my home. This was the place where I first felt loved and admired from so many in the neighborhood; this is where I first felt sought after, wanted in a way that never manifested in my home life. When my team won, we stayed on the court; when my team lost I was instantly picked to return to the court without having to wait for what could be a number of games, depending on the size of the crowd. I could literally play all day, from ten in the morning until suppertime in the summer and on the weekends.

"And I wanted to play all day. I wanted to be seen, to bask in the oohs and aahs when I blocked a shot and sent it flying onto the benches; when I flew upwards into the rarified atmosphere at hoop-level and tipped in an errant shot high above everyone else; when after a rebound I launched a full-court pass for a successful fast break. It was sheer poetry and every move, every scrape of our sneakers, every foul and subsequent argument, and every play – defensively and offensively – sang both within and to my soul. And I danced to that music to the point of ecstasy." (From "The Rail." Chapter 14: "The Sheer Poetry of Basketball").

Posted by Unknown at 3:52 PM No comments: